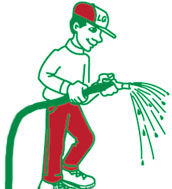 Call For A Free Bid

There is a contraption that has been a part of farming, lawn care, and construction since antiquity: the flywheel. This ingenious device proves that even Neolithic peoples understood — at the very least, in an abstract way — the principle of perpetual motion and energy distribution.

A flywheel can come in all sorts of sizes but it is most often thought of as a gigantic wheel, suspended on an axle and fitted into a track. It takes tremendous energy for the flywheel to turn but after achieving a certain amount of spin, its own tremendous weight will keep the wheel spinning constantly, under its own power.

The earth — itself a giant wheel, of sorts — is kept spinning for many reasons involving gravity and the way it was originally formed; we have Sir Isaac Newton’s first law of motion to thank for sharing the secret behind our movement in space. However, the earth is also a giant biosphere, wherein are numerous different systems at work to perpetuate and sustain life.

Thanks to the earth’s distance from the sun and our ozone layer trapping in certain nutrients, the earth is able to hold elements like water and air and earth in the safe confines of its atmosphere. As the earth spins, the sun will rise and set, which kicks off many diverse types of flywheels on the planet.

These are known as “nature cycles.”

There are numerous cycles, all at play simultaneously on the earth. Perhaps you remember learning about the water cycle in school — the system that dictates the evaporation and precipitation of water. Thanks to a cycle like this, Utah lawn care is made easier with numerous days of annual rainfall.

Working in tandem, these cycles are the entirety of Mother Nature’s lawn care programs. It is the goal of Lawngevity to compliment these flywheels with our own tools and supplements to keep your grass and trees healthy and green.

One of the most important cycles for our purposes as Utah’s lawn care specialists is the carbon cycle. Carbon is the most important element on earth for the construction of life, as all living things on our planet are carbon-based lifeforms and need it to form the various parts of their bodily frame.

Carbon, therefore, is integral to healthy gardens and healthy soil. As the fourth most abundant element in the universe, the expense and renewal of carbon has been dictated by earthly systems from the beginning of time.

The carbon cycle, like the aforementioned water cycle, tracks the path of carbon from the atmosphere to the earth and even within humans and animals. There are a few key stations within the system:

A single carbon molecule could travel from one station to the next until it reaches all of them but the cycle is less about the holistic travel of all carbon in a line and more about creating small cyclical relationships between the various stops.

As you can see, there are numerous ways in which carbon enters the soil and then back into the atmosphere. When it comes to Utah’s lawn care, Lawngevity promotes the healthy growth of your grass by destroying the weeds that would soak up the good nutrients in its place.

Creating good dirt so that your greenery can flourish is not an easy task. There are various lawn care programs that boast nutrient-rich soil by the end but the best way to ensure that your ground gets what it needs is to consult with the experts.

Generally speaking, there are a few dos and don’ts that a gardener should abide by if they want to promote healthy carbon levels in their soil.

If you need any help producing the best-looking yard on the street, the team at Lawngevity is ready. We know Utah lawn care better than anyone.